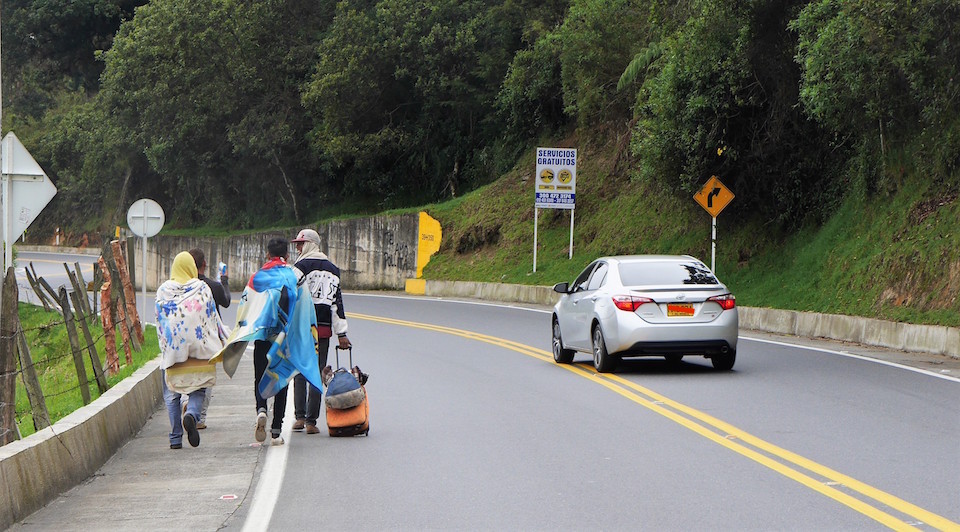 A family of nine Venezuelan migrants struggle to keep together as they hitch with no mobile phone and a baby.

“Look, if you’re going to walk across Colombia, why would you bring a baby?”, I berate a migrant mother by the side of the road outside Bucaramanga while attempting to fold up the baby buggy and strap it on the car roof.

According to the news media, the hollow-eyed Venezuelans hiking and hitching from Cúcuta to Bogotá were mostly young men, so I am surprised to find families with young children also making the trek.

“Back home all our family and friends had already left. We were the last to go,” explains a frazzled woman in the group.

“Home” for this family is the city of Valencia in central Venezuela which, according to Wikipedia, is an ‘industrial and economic hub’ of nearly two million people that is ‘expected to grow dramatically in years to come’.

Wikipedia needs an update because, according to my straw poll conducted while handing out drinks and biscuits to foot-sore migrants, a whole lot of Valencians are tramping through Colombia with no intention of returning any time soon.

This group is too big for my car, so the older lads will have to keep walking, I explain. And in future its best to split into smaller groups to hitchhike, I go on. Nine people and a baby are excessive, even allowing for local skills in cramming extended families into small spaces.

“But we can’t split up. We need to stick together,” says the brother. Then it dawns on me that these rag-tag walkers have no way to communicate with each other on the road. No hitting their friends with a Google GPS. No cheery emoji and pub-side selfie ‘I’m here now’ to a Whatsapp group. 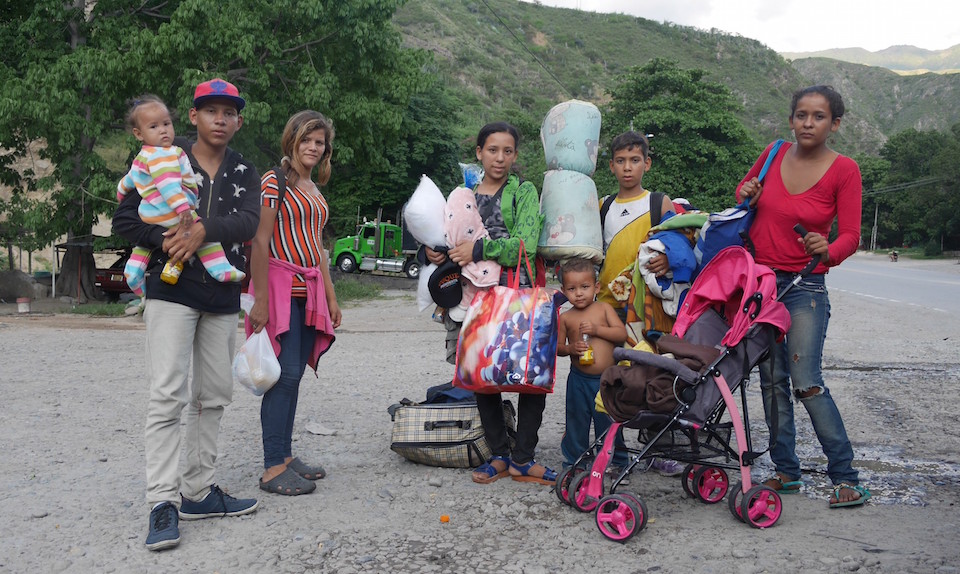 So we talk it through and make a plan: I will take the mothers and kids and drop them at the toll station at the bottom of the Chicamocha canyon. It’s warm there and sheltered. The older boys will walk and hitch and catch them up. Then, with night approaching, they can all together jump on a truck heading south to…where? They don’t know. Anywhere that’s not Venezuela.

We head south in silence through the orderly suburbs of Floridablanca, past the verdant country clubs and balnearios with upmarket restaurants. Everywhere is green from the recent rains. Along the route are knots of migrants. A forgotten phrase from fourth-form English Literature class foments in my head: “The fields were fruitful, and the starving moved on the roads.”

John Steinbeck wrote the line in 1938 in The Grapes of Wrath, a bitter tale of Oklahomans trekking west on Route 66 to escape the dustbowl and find work – and exploitation and death – on Californian farms. Funny how seventy years later mass migration to escape poverty is still the big issue. It’s happening worldwide, but nowhere on the scale of the thousands that flee Venezuela every day.

And by coincidence, the highest and hardest part of their journey from Cúcuta to Bucaramanga is also called Ruta 66, the road that crosses the chilly Paramo de Bérlin, all mossy, boggy and foggy; more Hound of the Baskervilles than Midwest dustbowl.

It’s where I pick up four shivering and hollow-eyed hikers, also from Valencia. Once in the warm car they promptly fall asleep but reanimate close to the city. They are worried as we approach a police checkpoint.

“They’re rounding people up and trucking them back to Venezuela,” says Junior, a carpenter by trade. I doubt this is true (many migrants I met were helped by the Colombian police) but these travelers rely on an imperfect roadside rumor-mill. I can sense their tension as we approach a police checkpoint.

“Relax, the police here only look out for their cellphone screens,” I tell as we glide through with the cops all staring at their hands. We make it safely to town where I lend Junior my cell-phone so he can call his brother who is waiting for him in Putumayo.

Later at dusk I stop for petrol. In the loom of the forecourt lights a large ore truck stops and blinks its lights, a sign for a large group of Venezuelans sitting on the grass verge to approach. Slowly at first, then in a rush – no-one wants to be left behind – the migrants clamber over the high white trailer sides like ants on a sugar pile. They are reaching and helping each other, passing luggage and babies and small children until they’re all on. The truck revs its engine and pulls out into the velvet night.

Venezuelan voices: How you can help

One migrant explains to me: at night the trucks give rides and in the darkness the police turn a blind eye. It’s how many move on, like hobos jumping freight trains, traveling slowly and surely into the unknown.