Home In This Edition When to tune in to watch the best of Colombian sport in...

Sick of finding out about the big sports events only after they’ve happened? We’ve gathered together all the sporting highlights of the weeks ahead, so prepare yourself for a month of excitement with our guide to these unmissable moments.

Worldwide, the Winter Olympics in Pyeongchang are the biggest sporting event right now. Previously, the event hasn’t generated much interest because Colombia has only sent one athlete in the entire history of the winter games. Up until now that is. Speed skaters, Pedro Causil and Laura Gómez, cross-country skier Sebastián Uprimny and alpine skier Michael Poettoz will fly the Colombian flag in Pyeongchang this year. The exact times they will compete can be found in the box below.

The Liga Águila season continues as always and if you haven’t seen enough of Millonarios vs Atlético Nacional in the Superliga, on Sunday, February 18 at 8pm, Millonarios host their long term rivals again, this time as part of the Liga Águila. Other hardfought derbies to look out for are Nacional vs América de Cali in the weekend of February 25 and Millonarios vs América in the weekend of March 4 with exact dates and times still to be confirmed.

The Copa Libertadores is also about to kick off. Independiente Santa Fe and Junior de Barranquilla are in the final qualification round, but Millonarios and Nacional have already qualified for the group stage. Millonarios kicks off with a tasty home game against the 2012 winners, Corinthians from Brazil, on Wednesday, February 28 at 7.45pm in El Campín.

Between February 28 and March 4, the Track Cycling World Championships takes place in Apeldoorn, the Netherlands. Fabián Puerta is the best card for Colombia, 18 months after his fifth place in the Olympic Keirin competition. In the ladies competition, Martha Bayona hopes to take home some silverware.

The cycling season doesn’t take a break after the Colombia Oro y Paz and Fernando Gaviria has set his sight on the Belgian spring classics. The opening weekend of the Belgian season is on February 24 and 25 with Omloop Het Nieuwsblad and Kuurne-Brussels-Kuurne and 23-year-old Gaviria is eyeing those races, in the lead up to a big performance in the monuments Milan-San Remo, Tour de Flanders and Paris-Roubaix.

For the runners in Bogotá, there are also some big events coming up. The Carrera Verde 10K is on February 18 with start and finish in the Parque Simón Bolivar and a month later on March 18 the Night Race 10K will take you through Bogotá by night, with start and finish at Centro Comercial Gran Estación. 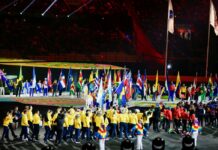