Home In This Edition Women in journalism make their voices heard

A tempered conversation on women in journalism quickly became a heated debate as panelists hurled opposing opinions at one another and audience members interjected with frustrations and jeers.

Ni con el pétalo de una rosa, which translates as “not even with a rose petal” is a multidisciplinary festival that promotes respect and the rights of women and girls. Colombian actress and Casa Ensamble founder, Alejandra Borrero, has been spearheading the two-week festival since 2013 and has been hosting the Conversatorio Mujeres Poderosas for eight years.

According to the festival’s website, the talk’s aim is to be “a space where women can inspire women and where women can demonstrate that through their leadership in different spaces, women have been able to break barriers and flaunt their female power.”

Arango started out asking some simple questions about the journalists’ experience as women in journalism. The critical feminism of Zuluaga, the youngest woman on the panel, stuck out as she first questioned why there are still so few women in leadership in journalism.

“As a woman at the table, I felt that my opinion was valued less than that of the men,” said Zuluaga in reference to her early years in journalism.

Arango lost control as moderator early on, as Zuluaga and de la Torre went head-to-head on several subjects, including their opinions on womens’ emotionality and the gender pay gap. When Zuluaga expressed her frustration at finding out that she was getting paid less than a male colleague in a lower-ranked position, De la Torre responded by suggesting that in these situations “maybe the man really has more experience.” This provoked disdain from much of the crowd, who responded indignantly and shouted “No!”

On feminism, De la Torre stated that women of her generation have an obligation to be feminists. However, she went on to suggest that women should stop complaining, focus on moving forward, and pay homage to the women who came before them. Zuluaga took a much more radical approach, arguing that women are often mistaken as too emotional because they have to be.

“We are fighting to exist and succeed in a man’s world,” said Zuluaga.

When Arango asked the panel about the topic that has most stook with them, the subject of war came up multiple times. D’Arcy, daughter of American journalist Tom Quinn, talked of the emotionally-scarring professional experiences she went through when covering the war in Colombia in the 1990’s. Samper expanded on this with her own account, reminding audiences of her news coverage during the 1990s, a time of heavy narcotrafficking-related violence known as la epoqua de las bombas or the bomb era.

“The war has affected us deeply. And the sad truth of it is that we haven’t learned everything that we should have learned,” said Samper.

Borrero chimed in on the subject of war when closing the event, remembering the way she used to always carry boots in her truck, just in case they came for her.

To close the panel, Arango asked the women to reflect on today’s political situation as it relates to the field of journalism.

“We have to try not to stoke the fire. We have to try to find windows of opportunity, beyond staying within exaggeration and violence and what doesn’t work,” said Samper.

D’Arcy added with a similar sentiment.

“I think that it’s time to reconsider activism and go back to journalism. Social media is capable of generating mass panic. We need to dedicate ourselves to finding the truth.”

When asked about what focus Colombian journalists should have during these trying times, Zuluaga turned to social inequality. “Asking ‘why’ is really important because we have a lot of social issues here,” said Zuluaga.

Despite the strong disagreement and obvious political incompatibility that existed on the panel, the event managed to end with an amicable, hopeful tone, when Borrero expressed that the conversation had only hit the tip of the iceberg. 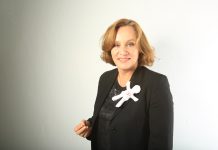 The many faces of Alejandra Borrero