Home Bogotá Bogotá hiking: Back to the hills?

The capital’s hikers are once again hoping they can walk the Cerros Orientales.

Will Bogotá’s beautiful hikes re-open in January – or is it just another false trail?

For almost two years now walkers, nature lovers and fitness enthusiasts have been frustrated by the closure of trails into the Cerros Orientales, the eastern hills that flank the city. Worse still, walkers have been tantalised by a series of news announcements on re-openings that turn out to be false, premature, or blocked at the last minute by interest groups.

In August this year the Corporación Autónoma Regional de Cundinamarca (CAR) announced there-opening of the Quebrada La Vieja, a popular trail to the páramo above Bogotá. But this was overruled by the Acueducto de Bogotá (EAB), the entity which manages the land. Until now the gated entrance to the much-loved route has stayed firmly shut.

But that could all change in a few weeks if city authorities go ahead with an ambitious plan to re-open the old trails and rehabilitate less-used routes onto the mountain.

According to a recent press release from the pressure group Amigos de La Montaña, city planners have been meeting with various interest groups, state entities and the police to open Quebrada La Vieja and the Las Moyas trails in the new year.  Other routes that could open regularly arePico del Águila (which starts in the Parque Nacional), El Aguanoso (which leads to the Guadalupe statue opposite Monserrate) and La Aguadora (Usaquén).

The group’s announcement is already causing a buzz among the hiking community. While it’s true that some shorter walks have never been closed – such as the Quebrada RioSan Francisco, close to Monserrate, and Las Delicias waterfall – the longer and higher hikes such as Las Moyas and Quebrada La Vieja have been shut because of land degradation, largely due to their popularity.

Other challenging ascents such as the Pico del Águila and El Aguanoso have been effectively closed because of a lack of police protection, though some walkers tackle them at their own risk.

Security has been a factor restricting access to the hills with many attacks and even murders in the past. This led to hiking groups to petition the city council to post police and horse-mounted patrols on popular routes at peak times. The success of this scheme in turn created a hiking boom with upwards of 5,000 people crowding the few trails on Sundays, which subsequently lead to the closures because of degradation.

The trails form part of a forest area, the Reserva Forestal Protectora Bosque Oriental de Bogotá, supposedly protected from urban development, but in reality under constant risk from property developers and illegal settlement.

The steep and often water-logged hiking paths are prone to erosion with and risks of landslides and falling trees. This in turn lead to the most popular paths being officially closed in 2017 while environmental impact assessments could be done.

‘We have to show that hiking activities are done under good conditions to guarantee the security of citizens, the right logistic conditions, so the trails are not so affected.On the other hand, we must respect the flow of people wanting to frequent them,’ said the head for CAR, Nestor Franco last August when announcing the reopening of Quebrada La Vieja for a test period.

This plan was promptly thwarted, partly by pressure from residents living close to the trail heads who perceive a security threat from a mass of walkers passing through their up-market neighbourhoods. The Asociación de Vecinos Amigos de LaVieja (AQUAVIDA), formed of residents from the wealthy Rosales barrio, has pressured CAR to adopt a ‘management plan’ that restricts the numbers of walkers.

But many users see this as impractical. Already in recent years paths have been controlled by limiting the hours of police presence on the trails, but this has also created the mad scramble that puts thousands of feet on the delicate paths during short opening times. Another strategy promoted by hiking groups – and one that seems now to be being taken up by the city council – is to habilitate and secure more paths to spread usage.

‘There should be several paths that open simultaneously to protect the mountain and not concentrate an excessive load of visitors in one place,’ said the Amigos de La Montaña communique this week. The citizen’s group sees public access and enjoyment of the forest as a key aspect of ensuring its survival, and one way of ensuring planners don’t sneak in.

This ‘eyes on the mountain’ approach chimes with Bogotá’s mayor Enrique Peñalosa who has mooted an even more ambitious crest trail, the Sendero de Las Mariposas, that would take in the city’s eastern hills and eventually open up 160kms of Andean upland to hikers, and act as a much-needed fire break in the forests. Critics of the ambitious plan claim it could itself usher in urbanisation.

The mayor remains positive: ‘This is going to be the main tourist attraction of Colombia,here all bogotanos will go, tourists will go, they will learn more about their nature and enjoy nature,’ said the city chief announcing the project mid-year.

But will any of it happen? For Bogotá’s hikers, the first step will be to re-open the mountain in January with the hope that having more trails will reduce the environmental impact. So, get your boots ready and watch this space for more details…. 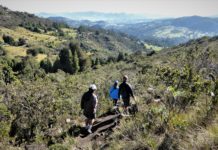 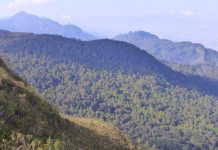 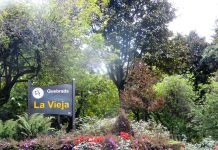