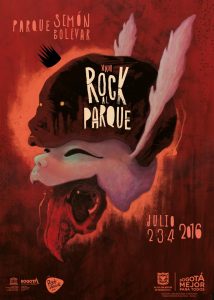 With the full line up now confirmed, Oli Pritchard looks ahead to the Rock al Parque 2016 festival and some of the bands who will be playing

Every year, Bogotá hosts a whole cavalcade of free or subsidised cultural events, but without a doubt the biggest is Rock al Parque. With tens of thousands of black-clad servants of Satan (but in a good way) descending on Parque Simón Bolívar, this is Latin America’s biggest free festival. And this July 2-4 will be the biggest yet. Running for more than 20 years, Rock al Parque is a true Bogotá institution. And it is gaining more and more recognition outside Colombia too. Last year Atari Teenage Riot told me they’d been looking forward to it, and it was a highlight of their South American tour.

The first day is normally handed over to extreme pure metal, but after that things get a bit more mainstream. Punk and hardcore bands usually play the second day. This year promises to be as big as usual. Despite heavy rumours, neither Metallica nor Rage Against The Machine are coming to shake the dust off their corpses. But Sepultura will be claiming to be young and relevant. They will make a lot of noise and they love Colombia. So it should be good despite them being shit since Max left.

The UK’s Napalm Death will bring even more noise and a lot of Grandad dancing from Barney Greenaway. Turn up to see if they play ‘You Suffer’, the world’s shortest song at three seconds. GBH are also coming from the UK. Poland often sends a big extreme metal band, and this year it’s Decapitated. True legends, this will see an almighty tear-up in the mosh pits.

The USA are sending a big delegation, headed by The Black Dahlia Murder. Sonically excellent and with seasoned stage presence, they should be massive. Baroness fit the bill of up and coming and are still young enough to play well overseas. Deafheaven fall into a similar category, and it really looks like lazy performers hacking out tired old hits (looking at you Black Sabbath) are on the way out.

Colombian bands rarely top the bill, but there’s still a fairly weak group this year. Standing out are Morbid Macabre, No Raza and Goretrade. A lot of local bands earn the right to play by taking part in a giant competition for votes and likes, which is pleasingly democratic in this era of corporate rock whoredom.

As well as music, there will be all kinds of stalls selling things as diverse as bicycles and phone services, plus plenty of black t shirts of course! If you’re going, be aware of the restrictions. You’ll need ID, technically proof of healthcare, no clothes with spikes or studs, no metal in shoes, no belt, nothing sharp and technically no camera. They don’t always check everything, but they are very tight on booze. People bury bottles of guaro in the park in the days before the festival and dig them up on arrival. But still, there won’t be much booze and they ask you not to smoke in the giant outdoor arena.