A discouraging global study conducted by the transportation app Moovit using data from its 50 million users, shows that the Bogotá transport system is failing with bogotanos spending more time on daily public transit than people in any other city in the world.

According to the study, the average bogotano spends a startling 97 minutes commuting to and from work on weekdays. This is more than the typical commuter in Sao Paulo, Mexico City, Santiago, or Buenos Aires – other Latin American cities that feature in the top 10 congested urban areas worldwide.

Moovit’s 2016 analysis reveals some interesting statistics. Some 32% of people travelling to work in Bogotá spend more than two hours in transit each day, slightly more than in New York and Mexico City, and close behind Toronto.

The average time spent waiting for public transport in the capital is 20 minutes, while 40% of commuters regularly wait longer. In addition, 22% of people walk more than one kilometre during their journey to work.

Bogotá Mayor Enrique Peñalosa has promised to make transportation infrastructure a priority during his term. President of the National Infrastructure Agency, Luis Fernando Andrade, has said that at least 12 major projects are in the works including plans to upgrade the Transmilenio bus system with a Metro system.

In a city of 97-minute commutes, the stakes are high. 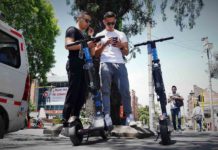