With the Petronio Álvarez Pacific music festival getting underway in Cali, we take a look at what the city has to offer and what to expect from the booze-fuelled festival, as well as catching up with one of Cali’s top restaurateurs. There’s also a lowdown on the best places to get your dance on.

Cali often gets overlooked on the tourist trail in favour of larger cities like Bogota or Medellin, or the more popular coastal stops, despite having a great deal to offer visitors. Cali is a place that oozes passion, salsa and good vibes, so I was keen to get to know it for myself.

Coming from La Nevera the stifling heat was the first thing I noticed on my first morning, although the air conditioning on board the Mio (a Transmilenio-type bus system) was a welcome relief as I made my way to the city’s zoo, one of Colombia’s largest. It’s a great place to spend a few hours, with a wide variety of residents (1,200 animals from about 180 species) from around the world including many from Colombia that you would never see without making a trip into the Amazon. Particular highlights are the selection of bears, the white Bengal tiger and the jaguar. Entry costs COP$16,000 per adult and is well worth the price.

Another highlight of the city is San Antonio, the old colonial district, built on a hill in a quiet part of town. In many ways it’s similar to Bogota’s Candelaria and of course it contains many charming centuries-old buildings. The real appeal of this area, however, is the breath-taking view from the peak of the hill, from which you can take in the entirety of the city. In the heat of the afternoon the streets seemed deserted, but it soon became clear, when I reached the central area around Ermita church, that the city really comes to life later in the day as it begins to cool down, with people emerging to take a pleasant stroll along the river.

Cali’s attractions don’t stop at the city limits though – there’s plenty to do within a couple of hours, including Hacienda Paraiso, the former home of author Jorge Isaacs. You’ll recognise him from the 50,000 peso bill. Take a bus to the small town of El Cerrito and then negotiate a taxi fare to take you the rest of the way. Situated in a glade where the flat sugar cane fields of Valle de Cauca meet the mountains, this beautiful nineteenth-century home gives an insight into the lives of the landed gentry as well as the life of one of Colombia’s most famed writers.

The nearby town of Buga is also worth a visit, with its somewhat exaggerated number of beautiful churches, as is Lago Calima, Colombia’s largest artificial lake, about an hour or so from the city.

Cali is regarded as the most dangerous of Colombia’s major cities, with remnants of the drug cartels still engaging in heavy violence. For the average tourist though, the city is relatively safe and far removed from the violence. It is however worth taking the normal precautions and not parading your valuables around.

I would have loved to have had more time to visit other attractions such as Cristo Rey (a Rio-esque statue of Jesus) and the city’s museums, most notably La Tertulia, Cali’s renowned modern art space. There is so much to see and do that it definitely warrants another visit, especially during the Feria de Cali and Festival Petronio Álvarez.

One of the pleasures of a country as wonderfully varied as Colombia is that there are so many sides of it to see –  Cali is just another fascinating face of the emerald. So I would wholeheartedly recommend strapping on your salsa shoes and taking a trip to La Sucursal del Cielo.

Not just the food that’s saucy…

For me, one of the delights of travelling is the colourful characters you meet along the way.  Cali did not disappoint. Michael Lynch, who runs the Teatro Mágico del Sabor, is a one-man-band-cum-chef-cum-artist with an unapologetic zest for life.

While it is unusual to be asked if you take it up the backside as a way of testing your level of Spanish, it is also unusual to arrive in a restaurant and find the chef cooking in front of his customers from a kitchen-stage, sharing songs, jokes and titbits of food as he goes along. We went for lunch, so there were only two other groups there when we arrived, but I was assured by the other guests that the place is packed in the evenings.

The commentary runs the full gambit from culinary to political as Michael – who jumps smoothly between Spanish and English – tells us where his salmon comes from and how he cured it, why you need to rub your meat and how he makes his Monsanto-crushed potatoes. Cue evil laugh.

The elderly couple at the table next to us were celebrating a birthday, and Michael sang a trova – improvising the words as his ever-capable wife showered them with rose petals in the final verse.

While pricey, the steak was one of the best I have eaten in Colombia – and almost as blue as the humour. You could have cooked the food on my cheeks as he sang a cheerful ditty about the need to uncross my legs, and my poor friend was almost steaming when he reached his suggestions about where to blow to cool things down. Mind, the exquisite plate of ribs that simply fell off the bone more than made up for any embarrassment.

Don’t miss the lulo cocktail Caipirulo with whiskey and aguardiente, or the home-made ginger beer, and try to save space for dessert.

Michael took some time to talk to us after the two birthday parties had left, freewheeling between songs, politics, restaurant recommendations and small talk. With a repertoire ranging from Colombian classics to Neil Young, the highlight was probably his own composition –hasta las tetas – about the wastage of plastic bottles.

Started in 1997 as a space for musicians, artists and dancers to come together and celebrate the cultural traditions of Colombia’s Pacific communities, the Festival Petronio Álvarez mixes gastronomy, music, booze and plenty of dancing in a proud cacophony of sounds and colours.

Annually, more than 100 musical groups compete in various categories, displaying some of the best in Pacific rhythms, like currulao and cumbia, and instruments, including the distinctive marimba. It is a stunning display of Afro-Colombian indigenous culture, reviving traditions and musical genres and taking over the city’s Canchas Panamericanas every night.

This year sees the arrival of Carlinhos Brown, multi-award winning Brazilian musician and cultural activist, whose blend of tropicalia, Brazilian percussion and reggae have gained him renown throughout the world. He takes to the stage on Saturday, August 15.

Be prepared – celebrating Pacific culture involves drinking a whole lot of viche, the region’s spine-tingling and remorse-inducing answer to aguardiente. With a ‘unique’ taste that packs a powerful punch, it’s made from sugar cane, regret and the memories of past hangovers. The presentation doesn’t help, with the home-made drinks served in plastic bottles leaving you to wonder whose bath-tub was the distillery.

When I visited Petronio Álvarez in 2014, it seemed to encompass the spirit of the Pacific, with passion, music and joy taking centre stage. It’s so easy to get caught up in the atmosphere, so contagious is the care-free and welcoming vibe – although I couldn’t say for sure that the viche was not a contributing factor.

As you let go and dance to the sounds of the Pacific, locals will, appreciating your effort at least, urge you on enthusiastically and try to teach you the steps, while you wiggle your hips haphazardly and look suitably embarrassed. Although, three bottles of arrechon in, the embarrassment seems to go out the window and across the road. It turns out I’m a phenomenal dancer.

In between bouts of epileptic dance fits, be sure to line your stomach with the delicious coastal cuisine – shrimp ceviche, fish soup or just some good old-fashioned spicy fried fish.

Of course, it is not all about the alcohol: this year’s festival includes a flotilla as well as a number of talks and discussions on Pacific culture and its historic traditions, with each night culminating in eurythmic performances. The final night sees a musical homage to the festival’s creator Germán Patiño Ossa and a marimbeada, featuring 20 marimba musicians. There’s also the bizarre world record attempt for most white handkerchiefs being waved in the air. Surely you can’t miss being a part of history?

The festival takes place from August 12-16, with concerts from 6pm every night at the Canchas Panamericanas (Calle 9 #34-39).

Cali celebrates its 14th Edition of the Mundial de Salsa 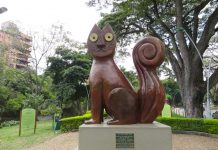 Getting stuck into Cali