The number of visitors to Colombia rose again in 2014, and the government has ambitious plans for continued tourism growth

A sharp slump in oil prices

in recent months may have economists scrambling to cut their GDP forecasts for the Colombian economy. Yet the government’s anxiety will be at least partially appeased by the apparently rude health of the tourism industry – which some estimates say accounts for more than five percent of GDP.

Statistics published by the Tourism Ministry in February show that Colombia welcomed over 4 million visitors in 2014 – an increase of 11.9 percent on the previous year. Moreover, the number of non-resident foreign nationals entering Colombia – the largest group of visitors – was up 14 percent from 2013, with a total of 1,967,814.

fair organised by travel agency organisation Anato on February 25, President Juan Manuel Santos said that by 2018 he hoped 5 million visitors from abroad will bring in $6 billion USD-equivalent of foreign currency.

Anecdotal evidence from businesses in the tourism sector backs up the statistics and official optimism. Andy Farrington, owner of the Cranky Croc hostel

in La Candelaria, told The Bogota Post he has noticed not only a steady increase in tourism since he founded the hostel in 2008, but also a change in the type of tourist.

Whereas before, the majority of visitors were long-term travellers who had been in other parts of Latin America and heard good things about Colombia, now a lot more of his guests are full time workers using their two to four weeks of annual leave to come specifically to Colombia.

“This means the message that Colombia is a great travel destination is now not only around Latin America but all over the world” says Farrington. “To me that is a significant change”.

Eighty percent of the foreign nationals who visited Colombia in 2014 hailed from the USA, 17 percent arrived from Europe and three percent came from the rest of the world.

European travellers will have more options to reach Colombia as of the end of March, when Dutch airline KLM will return to providing direct flights from the Netherlands to Colombia exactly 20 years after it last flew to the Colombian capital. KLM will fly three times a week from Amsterdam to Bogota, then on to Cali, and from the capital of Valle de Cauca directly back to the Dutch capital. Furthermore, Avianca’s route from El Dorado to London, launched in July, is likely to change from four times a week to daily later in the year.

Although the tumbling Colombian peso is causing concern for some, tourism providers could benefit as Colombia becomes a cheaper destination. The peso closed at $2,557 COP to the US dollar on Tuesday March 3, having lost nearly a third of its value versus the North American currency in the two years.

Non-resident Colombians were the second largest group of visitors last year, with nearly 600,000 returning to the country. Cruise ship tourists increased by 2.4 percent to just over 314,000, while visitors arriving at shared border zones with Ecuador and Venezuela accounted for the remainder of the 4 million.

Bogota was by far the most popular destination among visitors from abroad, with just over half stopping off in the capital.
Data from The World Trade

Organization and The World Bank shows that international tourism arrivals in Colombia have increased 260 percent since 2002, when fewer than 550,000 foreigners came to the country.

Domestic flight traffic was also up last year versus 2013, with over 20 million journeys made in 2014, while hotel

President Santos said at the Anato fair that “the world is falling in love with Colombia, and for that reason, we expect more and more from tourism”. He added that “seeing tourists in Colombia is no longer the exception, it’s the rule.”

The report shows that for the final quarter of last year, the business, restaurant and hotel

According to the World Travel & Tourism Council, travel and tourism contributed $37 trillion COP ($14.7 billion USD) to the Colombian economy in 2013 – around 5.4 percent of GDP.

The Council includes the spending of travellers, private and public investment in tourism, and spending of tourism workers to calculate the total economic contribution of tourism. Figures for 2014 are not yet available.

At the trade fair, the Ministry revealed a renewed tourism strategy, working with ProColombia and Fontur to showcase over 282 destinations and 964 tourist experiences to more international markets. It plans to bring together national and international campaigns under the slogan, Colombia es Realismo Mágico (Colombia is Magical Realism), which replaced the famous El riesgo es que te quieras quedar, (the only risk is wanting to stay), in 2013.

President Santos also told Vitrina delegates that the government is set to invest $2.8 billion COP in infrastructure developments for 39 airports. However, some in the tourism industry have criticised the President’s investment plans, pointing out that in the 82-page-long document that makes up the country’s latest Development Plan, the word tourism is only used four times. 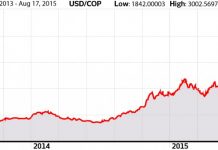