Home Colombia Coming Together in Times of Crisis: Aid Relief to Victims of Hurricane...

Over the past weeks, a host of Colombian and foreign companies with ties to Colombia came together to deliver on-the-ground aid to people affected by Hurricane Iota on the Caribbean islands of San Andrés and Providencia.

Coro Global, a Florida-based fintech firm, The Bogotá Post and Publicize, a public relations firm based in Medellín, coordinated with the non-profit Confraternidad Carcelaria de Colombia, to deliver over 100 aid packets of food, cleaning supplies and over 800 litres of potable water to victims in San Andrés and Providencia.

Led on the ground in San Andrés by Jonathan Hernández Nassif and his wife Yuly Andrea Botero Ortiz as well as in Medellín by Tereza Bízková, the team coordinated donations and bought, packed and distributed food and water to communities affected by the storm.

“We spoke to a lady who left Providencia [a neighboring island most affected by the storm] and was received in San Andrés, she came only with the clothes she was wearing,” said Hernandez Nassif when asked about the current conditions there.

“Many people lost their livelihoods as well,” he added. “In San Andrés, the touristic attractions in the north haven’t been affected much, but the south has been impacted heavily, with the main highway suffering significant damage and several restaurants were razed to the ground.”

“Colombia has been a second home for me and many of our team members,” said David Dorr, co-founder of Coro Global, a United States-based fintech startup that’s created a technology platform for transactions with gold. “We wish the islands of San Andrés and Providencia swift recoveries from this devastating storm.”

“We love this country and hate to see its people devastated like this,” said Saurabh and Navanwita Sachdev, residents of Medellín who also contributed to the relief efforts. “Anything we can do to help out, obviously, we will do.”

The Colombian islands of San Andrés and Providencia, located off the coast of Nicaragua, were heavily damaged, with the eye of the storm being just tens of kilometers away.

Considered one of the worst hurricanes to ever hit Colombia, Iota is also the first category five hurricane the country has ever seen, according to weather news site The Watchers. And the destruction it left behind is significant: Thousands of families found themselves without shelter, water, and access to healthcare.

In San Andrés, at least 700 families were affected, and 60% of the island was left without power. Providencia was hit even harder. Reportedly, 98% of its infrastructure was affected, with over 6,000 families in need of help.

While plans for basic repairs, sanitation, temporary accommodation, and infrastructure reconstruction are underway, there continues to be an urgent need for basic items, especially drinking water, foods, medicines, and hygiene products so that the affected can get by until houses are rebuilt and the islands recover.

If you’re looking to help, you can reach out to Confraternidad Carcelaria here.

Disclosure: This article mentions a client of an Espacio portfolio company. 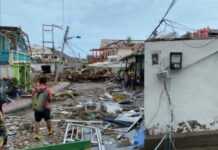