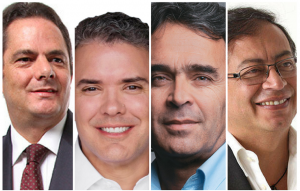 The first presidential debate kicked off last night and, despite little in the way of fireworks, the candidates were able to display sharp contrasts between their respective platforms and visions for Colombia.

Run by weekly magazine Semana and television channel Teleantioquia, the four candidates that participated in the debate were Iván Duque, Gustavo Petro, Sergio Fajardo and Germán Vargas Lleras. Humberto de la Calle did not participate last night as his flight had been delayed due to severe weather conditions.

The debate focused on nine main topics along with a rapid-fire round that skimmed over a range of issues from gay marriage to negotiation with the last remaining guerilla group in Colombia (the ELN).

Given the enormous importance placed on public order and the curbing of violence in the country, Vargas Lleras decried the recidivism rates and hoped that minimum sentences would be introduced as well as incarceration rates as he felt there were many crimes going unpunished.

Petro on the other hand rejected the idea of more prisoners, stating that the dominant trend in Colombia is to have more young prisoners rather than giving them direction through better education. By way of example, Petro alluded to his program as mayor of Bogotá where he claimed to have reduced cellphone theft by 33% in the Colombian capital.

With the exception of Vargas Lleras (who spoke of the ills of deforestation) all the candidates agreed that renewable sources of energy were the way forward though had different priorities on the environment. Speaking on the oil spill disaster in Santander, Duque said the accident was regrettable though it shouldn’t deter Colombia from continuing with oil drilling. He believed that Colombia should also push for more ecotourism to help with the growing problems the country has on the environmental from. Petro wanted to move away from state dependence on oil and spoke of the increasingly dire solution in Medellin that should be addressed with more radical solutions.

Following further statements on corruption, the economy, political reform, health and the peace process, the candidates entered a quickfire round where daylight appeared between their respective policies. On gay marriage for example, Duque was against it insisting only on custody or civil rights to be recognised for LGBTQ couples. Petro and Fajardo were for gay marriage and so too was Vargas Lleras though he didn’t agree with adoption rights for gay couples.

Similarly, Duque took a hardline on the legalisation of marijuana and, on this occasion was supported by Vargas Lleras, despite the growing acceptance of the drug in Colombia as well as the boom in medicinal cannabis in the country.

When speaking of the Venezuelan crisis, Petro and Fajardo embraced solidarity with those fleeing the Maduro regime and they refused to establish quotas. Both Duque and Vargas Lleras, on the other hand, believed quotas were necessary to safeguard Colombia’s borders.

As the debate concluded it was clear that Duque and Petro gave performances that were polished and composed, in equal measure to their comfortable leads over the other 2 candidates. The debate most likely solidified their leads among their bases without having changed the race in any significant way. Petro gave his answers professorially looking off to the side with hands clasped behind his back while Duque directed his answers directly at the camera. Despite having home-court advantage, former Antioquia governor Fajardo seemed less confident, animating his answers with pleading hand gestures and squinted grimaces. Vargas Lleras however was never going to win marks for his delivery, the former Vice President choosing instead to deliver his lines expressionless.