Home In This Edition Election 2018: the problem of polling in Colombia 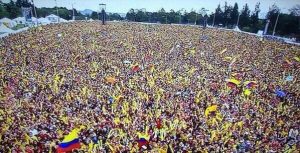 On Saturday, Oct. 1, 2016, it was assumed that peace in Colombia was winning by a landslide. It was the eve of a landmark referendum that asked a simple Yes/No question on the peace accord that promised to end a conflict that had spanned 5 decades, killed 260,000 people and displaced millions.

As reported in Semana the day of the election, the results of the major polling companies were all swinging in one direction:

When the results were tallied on Sunday, ‘No’ had won by the slimmest of margins with 50.2% voting against the peace accord and only 49.8% voting in favour of it. The result sent shockwaves around the world in a manner similar to what had occurred in the UK during the Brexit vote and in the US when Donald Trump won the presidency.

So what caused such an enormous discrepancy between the polls and the actual result? Adam Probolsky has been in the polling business for 25 years and, when he spoke to us from the headquarters of Probolsky Research in California, he told us that varying where you get the data will often dictate the accuracy of the polls.

“There is a shift in research which some caught on to and others didn’t,” Probolsky said, “Bottom line is that being able to survey people in multiple modes is really important. Talking to people on telephones and giving people the opportunity to respond online are really critical to getting active results.”

Online results also aim at removing a problem that phones can’t address; the so called “shy voter” too scared of revealing their true preferences for fear of criticism or public censure.

‘We identified in the US someone who was the shy Trump voter.’ Probolsky said, noting that many national polls that conducted online surveys were of greater accuracy than ones that targeted landlines or cellphones alone. This phenomenon is akin to former US president Nixon’s appeal to ‘the silent majority’ of the Southern states that helped him win the 1972 election. “There are always nuances that polls won’t be able to identify. In the US that nuance is 50 different states. In other places, there are different nuances to look to.”

Probolsky, whose clientele are mostly in government but also include many corporate clients in the real estate/development space, said that the media might also have their own role in compounding the errors made by polls.

“There is a tendency by the media to want a robust contest and have something on a daily basis to talk about.” Probolsky said, “Some people may look at that as a criticism of the media but I think that’s just the reality of it. They choose to focus on certain numbers and not to cover others.” It was also argued that the government’s prohibition of releasing polling data prior to the referendum and the poor optics of a photo-op between the government and the FARC may have combined to swing the vote towards ‘No’.

At this stage both CNC and Invamer have leftist candidate Gustavo Petro ahead whereas former Medellin mayor Sergio Fajardo is favoured by a recent EcoAnaltica poll. This tendency towards left-leaning candidates is also prevalent, in Probolsky’s view, among Colombians in the United States. Probolsky was able to ascertain that of the 22,500 voters in California that were born in Colombia, 54% are registered Democrats while only 17% registered as Republican in the previous election. How this translates to a Colombian election win was less clear but, given the progressive politics of California Democrats, he believed the more liberal candidates had a better chance among Colombian-Americans in California.

“In the end, there’s always one pollster that gets it right.” Probolsky told us, warning of the excessive reliance on a certain poll over another. In the case of the peace referendum, the least wrong poll result happened to be a minor player in the market, Gaurumo. However, what remains unclear is how much confidence the public has in any of the polls as election day draws closer. Maybe someone should poll that.