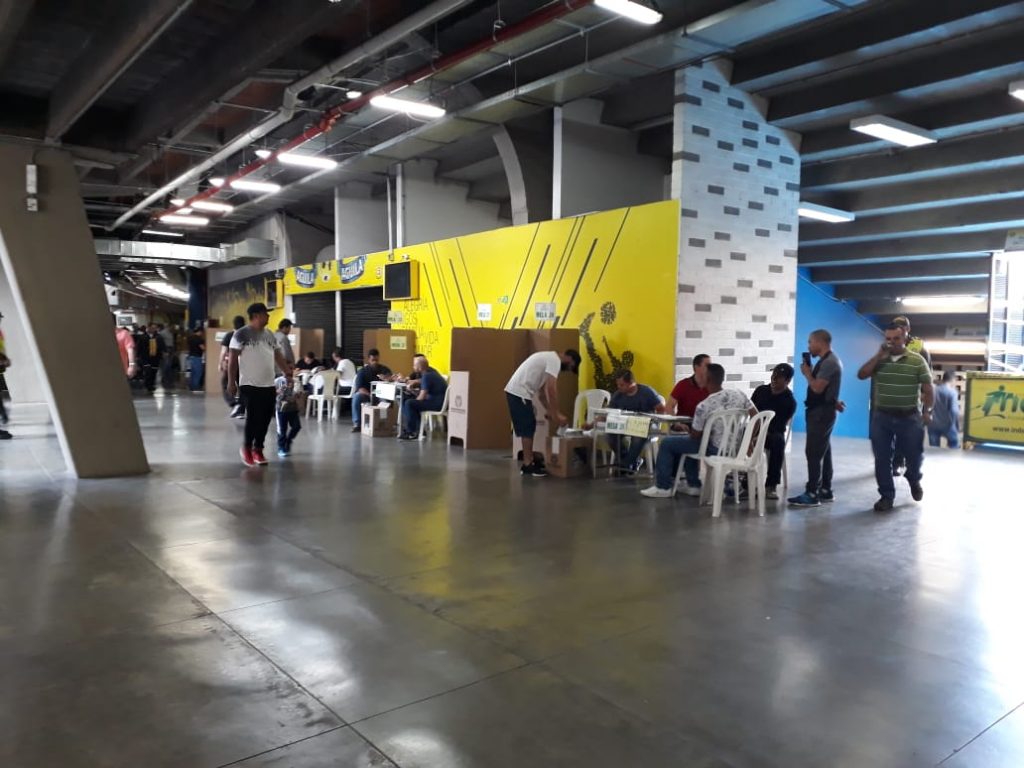 Inside Medellín’s Estadio polling station, located within the stadium itself, voting seemed to be running smoothly at around midday, with the environment described as “calm” by Luisa, a representative from the Registraduría Nacional (Colombia’s Electoral Commission).

However, outside, the grounds were bustling with football fans who seemed to be far more engrossed in the various World Cup matches being shown on screens around the stadium, along with families making the most of an opportunity for a Sunday outing.

For logistical reasons, namely to speed up the process and cut queues, the Estadio polling station is designated strictly to male voters, whereas women are sent to Plaza Mayor in the centre of the city to vote. This could perhaps explain why, when asked, a group of male jurados (those who supervise activity at the voting tables) said numbers of voters seemed significantly lower because of the World Cup, amongst other factors.

Although the World Cup matches could well have influenced the time slots people chose to cast their votes, with many choosing to rush last minute as opposed to going in the morning, numbers suggest that yesterday’s voting turnout was almost the same as the first round’s.

53% of Colombians are registered to have voted, similar to the previous round’s toll of 53,36%, according to El Tiempo. Despite the persistence of fairly high abstention rates, they remain marginally lower than those recorded between 1990 and 2014, according to the newspaper.

Speaking to The Bogotá Post, Coronel Yolanda Arteaga, the police spokeswoman leading the team in charge of guaranteeing voters’ security, reported that there were 42 uniformed policemen present in the Estadio polling station, along with approximately 480 jurados. At around 1pm, she reported that although the voting centre has a total capacity for 63,098 voters, by this point in the afternoon, 13,415 people had cast their votes. 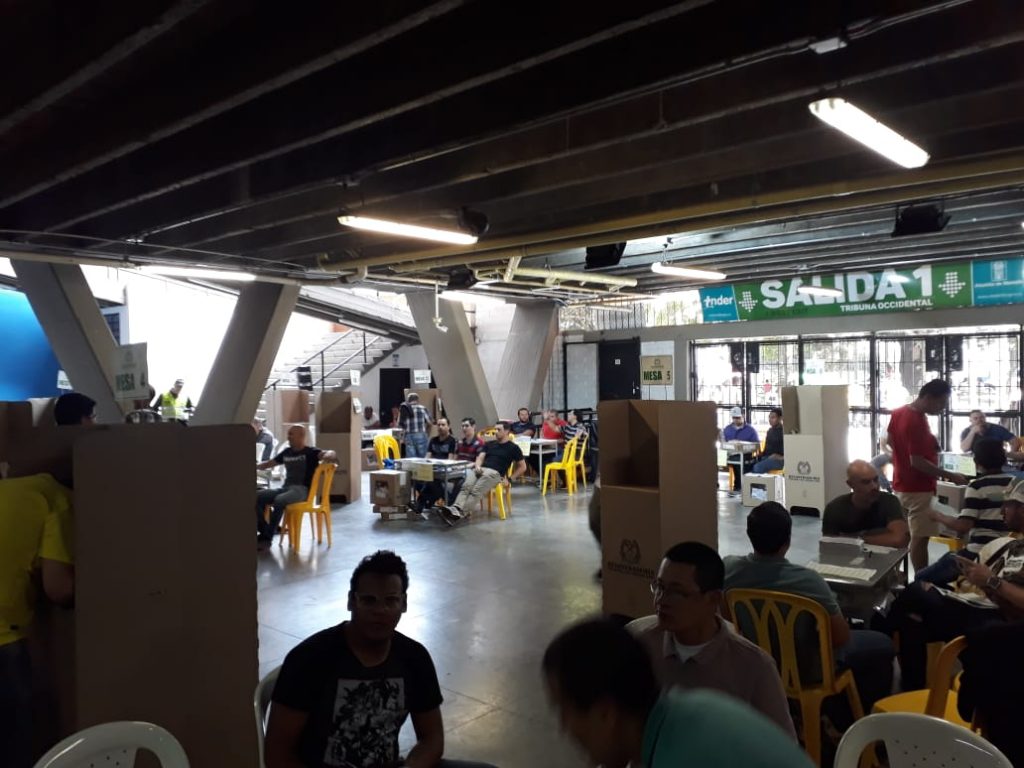 Arteaga also stated there had been no voting irregularities. “We have not experienced any problems,” she said. “There has been a lot of collaboration from the public and state entities in order for us to be able to exert the relevant control in these elections.”

However, according to an article published by W Radio, this had not been the same across all parts of Medellín. The news source indicated that there had been one arrest in the barrio of Buenos Aires for electoral crimes in favour of Colombia Humana. The accusations were subsequently strongly denied by Gerardo Vega, the director of Petro’s Antioquia campaign, who stated, “We categorically reject the accusations of fraud.” Coronel Arteaga also denied all knowledge of the irregularities.

According to the Electoral Observation Mission (MOE), there were a total of 272 reports of electoral irregularities across Colombia yesterday between midday and 3pm, mainly involving the buying and selling of votes.

Other supervisory officials on election days include the electoral testigos, or witnesses, who are tasked with observing the voting tables and watching for irregularities, which they must then report. Notably, all electoral witnesses at the Estadio polling station were representatives of the Centro Democrático party, said registraduría operational technician Nicolás Maturana.

Despite the lack of Colombia Humana voting witnesses, there were Petro supporters present among yesterday’s crowd. Manuel, a coconut seller from Apartadó who has lived in Medellín for 40 years and works outside the stadium, told The Bogotá Post that he had voted for “his idol” Gustavo Petro. “He is the only one who can help the Colombian pueblo,” Manuel said, emphasising his disapproval of the “corrupt pair” that is Iván Duque and his mentor Álvaro Uribe, who will do harm to the country, in his opinion.  “May Petro win!” he shouted loudly.

Luis Rodrigo, also an elderly Petro supporter, spoke of his astonishment that the people of Antioquia continue to support Uribe despite the harm he has done to the region. “We are the worst victims of Uribe,” he said, “we have suffered the worst massacres…this town has no memory.”

Petro, for Luis Rodrigo, represents change. He also outlined his belief that the politician’s young supporters will be the ones to eventually ensure the success of Colombia Humana at some point in the future. “The people have woken up,” he stated, “even if we don’t win this time … the younger generations are the ones in charge … I have faith that it will work out.”

Among the majority of voters however, there was, as expected, strong support for Centro Democrático.

One middle-aged male voter told The Bogotá Post of his plans to vote for the man he called “Don Duque,” whose proposals he liked because they set out to help “all Colombians”. Another young male voter named Yoiner, who owns his own business, also explained why he had cast his vote for the Centro Democrático candidate, who has now become Colombia’s youngest ever president, despite not agreeing with all of his proposals.

Thanks to his Cultural Corporation, whose goal as a business is to transform lives through art, Yoiner has been able to work in sectors of the city spanning from Poblado to Comuna 3, and has seen how it is possible for the private sector to eventually give back to the public sector.

For this reason, he said, he does not think Colombia is ready for private enterprises to be handed over to the public sector, as Petro had outlined in his proposals, and approves of Duque’s support for private businesses. He added that his decision not to vote for Petro was also influenced by the politician’s radical past, claiming that voting for somebody who had committed human rights violations sat uncomfortably with him.

Speaking to a female middle-aged voter outside the polling station, who had already cast her vote in Plaza Mayor, she outlined her hopes for a Duque presidency. “I just hope he will be honest, and does what he says he plans to do,” she said, adding that Petro had no leg to stand on in politics as a former guerrilla who has committed violence.

Despite his oppositions’ fears, Petro did manage to surprise people by winning 42% of yesterday’s vote, more than many expected, including Petro himself who tweeted, “what defeat?”. In some ways, these figures are also a victory for Colombian democracy, as the first time such polar opposite candidates have made it through to hard-fought final election rounds.

However, despite not winning Bogotá’s vote, Iván Duque is indeed Colombia’s new President-elect and will be inaugurated in just under two months’ time. On the eve of his victory, he tweeted, “I will devote all my energy to uniting our country. No more divisions. We want a country with everyone and for everyone #ThankyouColombia.”