This weekend sees the first of what will probably be three sets of elections in Colombia this year.

You’ve probably heard a lot about the presidential elections in Colombia later this year, as we’re starting to move into full campaign mode. But the presidency is not the only important election taking place this year. Colombians will head to the polls this weekend too. This election is officially for the Senate and the House of Representatives, although there’s an unofficial consultation for the presidency as well.

The presidential elections coming up in late May (29th) and probably June (19th) hog the limelight, but elections in Colombia for the two houses of government are just as important. Surprisingly, the parties in each contest are quite different. The Congress is dominated by five or six main parties, who don’t always field strong presidential candidates.

To vote in Colombia, you need to be of sound mind, 18 or over and hold Colombian nationality. It’s worth noting that the last of those conditions doesn’t apply for local government elections in Colombia (coming next year), where residents can also vote. There are 38.5 million registered voters, although apathy means turnout is likely to be significantly lower – around 50%, possibly under. Last time around it was 47.25% for Congress.

Elections in Colombia are always held on a Sunday, and it normally sees a dry law (ley seca), meaning alcohol is banned for sale from Saturday evening to Monday morning. Every cédula holder registers their card at one of the 113,000 voting stations and then votes there on election day. However, large voting stations can also receive floating voters for those that can’t travel to their assigned station for any reason. When voting, you request various slips, depending on what you wish to vote for, and rather counter-intuitively place an X over the number of the desired candidate and/or name of the desired party.

What’s up for grabs in the elections in Colombia?

The Senate has 108 seats (curules), of which 100 are open to national popular vote. The remaining seats are reserved for Comunes (5), indigenous vote (2) and the runner up of the presidential election (1). The indigenous community’s seats are guaranteed by the Constitution, and the Comunes seats are guaranteed under the terms of the peace process until the 2026 electoral cycle finishes. Voters in elections in Colombia request either the national voting slip or the indigenous community slip, as appropriate.

The House is much larger, clocking in this year at 187 representatives. These are not centralised elections in Colombia – they are divided regionally. Like the Senate, though, there are special voting slips available for indigenous and also Afro-Colombian communities. The 187 are divided on a population basis among the regions (166), indigenous communities (1), Afro-Colombians (2), Colombians abroad (1), the special areas designated under the terms of the peace process (16) and a final one for the running mate of the runner up in the presidential race.

The number of nationally elected seats in the Senate for each party will depend on the number of votes they receive in the elections in Colombia. To gain any representation, a party requires 3% of the total votes cast – likely to be around 450,000-500,000 this year. Dwarf parties can form coalitions to gain some sort of representation between them, even if individually they fail to reach the limit for representation. After the parties with fewer than 3% have been discounted, the remaining seats will be assigned proportionately. Parties that presented named candidates for popular vote will generally assign their seats to those candidates in order of popularity. Other parties simply assign the seats as they please.

These elections in Colombia will undoubtedly have an effect on the presidential race as well, not least because there are also three coalition groups ascertaining their most popular candidate. Basically, these groups have agreed not to run against each other, and have put their pre-candidates together on a list, from which the most popular will run in May’s election.

The three coalitions are the leftist Pacto Histórico, from which Petro will undoubtedly be chosen as candidate, and the two other groups Coalición Centro Esperanza and Equipo por Colombia. The Coalición is likely to be won by Sergio Fajardo, although Juan Manuel Galán and Alejandro Gaviria whereas the Equipo’s big names are Alejandro Char, Federico Gutiérrez and Enrique Peñalosa. Francia Márquez is tipped to be a distant second for the Pacto, meaning she will likely be Petro’s running mate for the elections in Colombia. 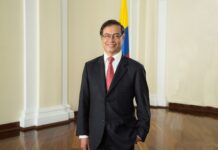