The story of the Galleon San José is back in the news as President Duque presents new underwater images. The story may have resurfaced but the wreck is still a long way underwater.

Fresh film footage of the legendary treasure ship has put it back in the news. Here’s a brief summary, just in case it pops up in the Pub Quiz.

Yes. The Galleon San José also made the news back in 1708 when it was attacked on the Caribbean coast close to Cartagena. It was the flagship of a treasure fleet carrying gold, silver and treasure from Panama to Spain, but was raided by British Navy boats hiding in the Rosario Islands. The galleon exploded and quickly sank. Today the loot is worth around US$17 billion.

And it’s just sitting on the seabed? Where’s my mask and snorkel…

Don’t hold your breath. The wreck’s exact location is a closely guarded secret, but it is believed to be in deep water, like between 600 and 1,000 metres down. And it’s been protected by the Colombian navy since its discovery in 2015.

But I read somewhere it was discovered in 1981? Did they lose it again?

Depends on who you talk to. In 1979, a US company called Gloca Mora Company set out to find the wreck off the Colombian coast using sonars and a submarine which played cat-and-mouse with the Colombian navy. Then, in 1981, having found a wooden wreck consistent with the San José, they were boarded by a gunboat and sent packing from local waters.

The loose deal they had made with Colombia to find the wreck somehow unraveled. Then their salvage company – Sea Search Armada – became locked into decades of legal wrangling to win back the salvage rights, with the main case dating back to 1989. Since then several court rulings have backed SSA’s claim to a share of the treasure, but the Colombian government has steadfastly refused to cut a deal, and in turn claims that the San José is nowhere near the site originally identified by the US company.

Wow, this is like a movie. Is there a role for Captain Jack Sparrow?

Or maybe Aquaman. Take your pick. But anyway, this story has its own larger-than-life hero in the form of Roger Dooley, an American-Cuban underwater explorer variously described as an archaeologist, plunderer or treasure hunter who scoured Caribbean waters for sunken wealth at the behest of Fidel Castro.

In one cinematic scene, the white-bearded Dooley – who has been likened to Ernest Hemingway – one late night in Washington presents Colombia’s former president Juan Manuel Santos with a treasure map based on decades of research in Spanish colonial archives.

But there’s a further twist: Dooley has previously worked with contractors for SSA, causing the salvage company accusing him of pinching their own coordinates for the San José. The adventurer hotly denies this, having himself spent decades investigating the wreck in old colonial archives.

What is clear is that Santos trusts Dooley. In 2015, the American Cuban was named Chief Project Archaeologist and joined the Colombian Navy and the prestigious Woods Hole Oceanographic Institute to search again for the San José. If in fact it was ever lost in the first place.

Sounds like a team to get the job done.

Yes, and the wreck was found conclusively in November 2015, though only scant details emerged until 2018 when the partners agreed to release details of exploration. Hence the slew of San José news stories and photos of intact cargo, including gorgeous Chinese pottery. Meanwhile Dooley’s Swiss company Maritime Archaeology Consultants (MAC) was trying to hammer out its own salvage deal with Colombia….

Oh no, haven’t we been here before?

Yep. The problem for Colombia is the cost of recovering the cargo, which could run to US$70 million. And the billion-dollar treasure is an estimate; there was never an inventory. And how much can be successfully recovered? One option recently mooted the Colombian – and backed by MAC – was to fund the salvage with a share of the goods retrieved. But there remains the problem of who actually owns it.

Exactamente. This was a Spanish Crown Ship sunk by the British while carrying wealth from colonised countries now recognised as Peru, Bolivia and China, and now resting in Colombian waters. Plus, out of a crew and passenger list of 600 souls, only 11 survived. The rest are in a watery grave marked by the remains of the San José itself. Several countries, and an indigenous group, have dibs on the loot, and there are ethical arguments to not touch it at all.

A right legal tangle in other words. So, remind me, why is it back in the news?

In June 2022, the Galleon San José once again made world headlines after President Iván Duque presented a new video of cannons, coins and crockery on the seabed, filmed with undersea rovers purchased by the Colombian Navy. The gist of the story is that Colombia now has the technology to find and monitor wrecks, in fact two more wooden hulls were presented as being new finds close to the larger treasure wreck. Though experts say this is incorrect: these boats were already known.

Will Colombia ever see any benefits from the galleon?

Because of these legal issues, and the headache to find a formula for how to fund any recovery, the Duque government has left the wreck untouched for the last four years while empowering the navy to find practical ways to monitor the site. But at least he is now clear that the treasure – and that from future ships – is “patrimony for all Colombians”.

OK, so that scotches any “treasure for salvage” deal then.

Pretty much. Partly under pressure from Spain – which sees the wreck site as a tomb for Spanish sailors – the Colombian government has cut out companies like MAC from a partnership deal where they receive some of the cargo.

So, will it all go in a museum?

Here’s the thing: A museum and investigation center is planned for Cartagena, but it’s not practical to protect and display such a huge treasure. Also, large parts of it – silver and gold ingots, coins, and uncut gems – are not that exciting to look at. These bits could be sold off, but any cash coming in will attract new claims from countries like Bolivia where Spanish conquistadors looted the precious metal or forced slaves into extracting it.

Tricky. Perhaps it’s not such a great find after all?

My point exactly. With billions of dollars of wealth at stake it will be almost impossible to mount any salvage that’s not at risk of corruption, particularly one run by the Colombian military recently accused of inflating the cost of the robot submarine purchased to monitor the wreck.

Meanwhile, the national overseer of the Submerged Cultural Heritage of Colombia has raised the “terrifying possibility that the wreck is already being systematically looted”.

Sounds like hot air. How can you loot a wreck 800 metres down?

Well, look at the Titanic. The wreck of that famous ship is 3.75 kilometres deep in the cold Atlantic – more than four times deeper than the San José – and despite US protection is being stripped out by submersibles. Titanic portholes sell for US$50,000. How long before a San José doubloon pops up on Craigslist?

The incoming president will not rush to pick the “Galeón San José” file from his in-tray and will be happy to kick this can further down the road. But pressure will mount to do something amid rumours and speculation that the treasure is at risk, maybe even from the people tasked to protect it. Expect much more newsbytes before the stricken ship and its 600 hapless souls are finally laid to rest. 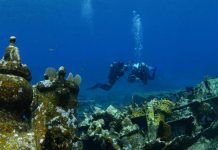