Smoke signals are being sent from Colombia. As a country historically at war with itself for more years than not, Colombia seems to always be fighting tooth and nail against its own reputation. The machismo culture that still reigns “king” in many circles makes disparities especially prevalent for women in times of turmoil. This is showcased by the violence, deaths, and sexual assaults occurring in the 2021 protests, which only compile on top of the 132 reports of sexually violent acts already committed against women by police between 2017 and 2021. These numbers demonstrate the need for a shift in power dynamics for women.

In 2016, Colombia signed a historic peace agreement with FARC to construct a path to peace, with gender equality a considerable focus and 130 gender-focused commitments defined. Unfortunately, the government’s actions have fallen short, as The Kroc Institute for International Peace Studies reported in 2019 that 42% of the commitments in the agreement are yet to begin three years later.

In order to try and patch the deeply entrenched tears that are woven into Colombia’s gender fabric, it is necessary to first create a space where it is safe to talk about these issues. The faculty of empowerment comes from using your voice—and women in Colombia need to finally be heard. Two organizations, Red Thread Publishing, a new all-female publishing house based in Medellin, Colombia, and Proyecto Florecer, an organization that empowers female leadership in underserved communities, are providing platforms for just that.

The plight of women in Colombia

Despite the implementation of several laws and initiatives to combat the violence that Colombian women face, femicide still runs rampant in the country. An average of nearly three women a day were killed in Colombia in September 2020—with 86 femicides recorded during that month in total. What is more, the National Institute for Legal Medicine and Forensic Science said that the pandemic left more than 15,000 women in Colombia at extreme risk of femicide. This femicide is shown in various capacities: In the household with domestic violence and marital rape, in the community through sexual violence and trafficking, and finally in respect to women’s reproductive rights.

These spikes in violence towards women were projected to be a result of a resurgence in armed group violence, economic fallout, and the ripple effects of the pandemic. Unfortunately, these numbers can only be expected to heighten with the addition of the violence seen towards women in the 2021 protests, leaving the female population even more destitute. Unfortunately, these unsettling realities for women in Colombia today serve as a conduit to further disadvantages.

From its violent roots, archaic stereotypes have grown and are dominant within Colombian society—creating unfair suppositions towards women. A woman is the expected responsible party for household work and the care of families—with women completing 7.23 hours of unpaid work per day on average. This robs women of the same opportunity to participate in the workforce, coercing them into informal work where job security is uncertain and wages are low. These significant challenges are the major roadblocks on the path to gender equality in Colombia.

Pointing out the problems and labeling them does little for the solution. With something as multi-layered as inequality that breeds violence and disadvantage towards women, there is no linear equation to a cure-all antidote. As chances of economic autonomy continue to fall and the pandemic wears on, women desperately need more opportunities to construct their own paths.

Building a brighter future for women

Women, the world over, have deeply-rooted fear linked to speaking their truth. In Colombia, there is a larger risk of violence, retribution, and even death when it comes to attempting to shift the delicate and forcefully traditional power structure.

Red Thread Publishing is a publishing house committed to empowering women through writing and publishing. By creating a platform for their stories, Red Thread amplifies women’s voices—giving long overdue and well-deserved power to them after many years of silence. Red Thread works to elevate women across races, ages, and socio-economic definitions; with a mission to help women become successful and influential authorities in their fields. This helps to balance the scales for Colombia’s female population—providing the tools & community for women to use their voices and tell their stories—by proxy providing agency over their lives.

Through teaching and supporting every step of the process, this trailblazing publishing house stimulates and accelerates a woman’s personal and professional growth, giving them the tools necessary to build confidence and independence. The impact of publishing goes beyond the tangible book, as it can have a transformative effect not only on the author but on the readers with which those words resonated. Changing the world starts by changing the voices that get heard—giving all stories the chance for exposure and validity.

“By believing in the power of women’s voices and stories, Red Thread aims to support women not only to write and publish their books but to really embrace their voice. This helps female empowerment to be expedited, and to reach a wider impact, whether that be on a local or global level,” says Sierra Melcher, an author and the founder of Red Thread Publishing. “Stories change lives, and women’s stories matter.”

Red Thread will invigorate a revolution in publishing—creating kismet between the author and the readers who are searching for what these women have to share. As Melcher tells her authors: “Get your books into the hands of the women who need to read them the most.” Having lived in Colombia for 12 years, and now helping hundreds of women to publish their stories, find their voice, and change their lives,  Melcher has seen that the improvements needed for women within the Colombian community run deeper than the page. In order for a woman to feel empowered enough to tell her story, she has to feel safe and brave enough to believe that her’s is worth telling.

In that understanding, Melcher built her publishing house on a foundation of community engagement. With holistic and morale-building activities that supplement her coaching in writing, Melcher takes a multi-dimensional approach to  female-focused support through yoga, therapeutic women’s circles, and feminine integral retreats. Red Thread supports the community further with 20% of their projects being nonprofit, providing a platform to women that would otherwise not have the opportunity to publish their work. Furthermore, 100% of the profits from group books published by Red Thread are donated to nonprofit projects that specifically support women.

As Medellin’s first all-female publishing house, Red Thread helps to turn the page on gender inequality in Colombia and stimulate a much-needed trend towards female empowerment. In the words of one of Red Thread’s first published authors, Stacy Dyson, who authored Lovely and Suffering, “Publishing my book saved my life.”

Constructing a sisterhood of self-worth

Melcher has realized that when it comes to supporting women, we’re stronger, together. One of the nonprofits that Red Thread is in close partnership with is Proyecto Florecer. Proyecto Florecer aims to inspire women and young girls to be leaders of the future through a community kitchen in underserved neighborhoods in Medellin. With a volunteer team consisting of single mothers and Venezuelan refugees living in Colombia, the nonprofit provides a community to those who are in need of a sense of belonging. In their sisterhood, they empower each woman through the weekly chance to be a “Kitchen Boss”, where they are responsible for managing the details of the meals and setting the tone in the space as the team leader.

“It is a beautiful thing to serve food to people in need. I think everyone needs a place like this, a place where you can share your experiences, your fears, and your emotions with women and learn—that you are not as alone as you thought,“ said Katty, a member of the Proyecto sisterhood. “Through Proyecto Florecer, I united myself with others and make the world a little better every time I volunteer.”

Through the practical application of a community kitchen, women then bring these lessons in leadership home with them, helping to influence the way in which they raise their children, interact with their neighbors, and value their own self-worth. Proyecto Florecer also offers personal development workshops in the themes of integration, xenophobia, sexual health and reproduction, leadership, communication, and teamwork. These workshops provide single mothers and young female volunteers with the tools necessary to be confident and employable members of the community.

“Lack of economic independence, as well as societal gender roles, are limiting factors for women and young girls in Colombia,” said Proyecto Florecer Founder and Program Director Erin Colton-Enberg. “Proyecto Florecer was created to challenge the status quo, enabling young women to reach their potential and build positive communities of support so that females can understand their own capacity to be agents of change.”

The National Development Plan for 2018-22 includes an entire chapter on women’s rights based on three dimensions: Economic, political, and physical integrity—which includes violence against women. While this may sound hopeful, effective implementation is lacking.

In order to keep authorities accountable, the community needs to implement the importance of gender equality on the ground level by supporting its women personally, professionally, and socio-economically. This will generate the natural advancement of the female population in local Colombian communities, helping to slowly but surely erode away the misogynistic culture.

Although the story of Colombian women is hard to read, the status quo doesn’t change overnight, and there is still a chance for a brighter more opportune future to be written. Through platforms such as Red Thread publishing, and the community support as seen through Proyecto Florecer, the female population in Colombia might just have a chance at ownership over their future narrative.

Emily Senkosky is a writer living in Colombia. 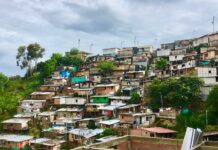