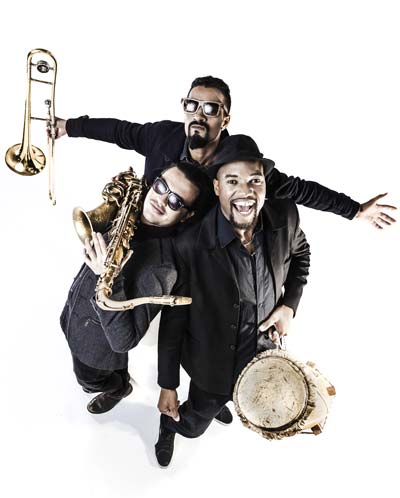 With the Latin Grammy’s due to be awarded on November 16, Salsangroove’s Pablo ‘Watusi’ Martínez, Juan Felipe Cárdenas, and Juan Carlos Arrechea – some of the musicians who are revolutionising the salsa scene – talk to The Bogotá Post.

BP: You three have different approaches to music, and different musical backgrounds; Juan Felipe is a renowned saxophonist, Juan Carlos is a percussionist and dancer, and Pablo graduated from the school of the Orquesta Sinfónica Juvenil de Colombia (Youth Symphony Orchestra of Colombia). Please tell us a little bit about your backgrounds, and about how such diverse talents came together to consolidate the Salsangroove project.

Pablo: It is true that we come from different musical backgrounds, though Felipe and I studied together in high school. Perhaps it is those different influences which complement each other when we are creating pieces, or versions of the pieces. But I believe the most important thing is that we have a long history of friendship and facing professional challenges, which means the three founders of Salsangroove know each other well and work very effectively together like brothers, with a lot of heart.

BP: How would you describe the relationship that Salsangroove has with the classic salsa genre?

Juan Carlos: We have a lot of information about traditional salsa from Pablo and Felipe’s experiences with La 33 over many years and mine, accompanying various salsa artists visiting Colombia as well as with La Mambanegra. We take different elements from them, like the tumbaos of the piano, the clef, the conga, the kettledrum, the bongo, the maracas, besides including the interpretation of choruses, pregones and improv too, in this way, achieve this combination with electronic music sounds and beats.

BP: Please tell us about your work with La 33, La Mambanegra, and ChocQuibTown.

Juan Felipe: Pablo and I played with La 33 as interpreters and composers. Pablito composed pieces like ‘Quiéreme na ma’, ‘Ya no me amas’ and  ‘Mambo con boogaloo’. He was also the leading voice for some of the band’s emblematic songs on the three records he recorded with La 33, like the version of ‘Roxanne’, ‘Me quedo’ and ‘La rumba buena’ among many others. Plus he added a lot of power live! I composed ‘Guayabo’, ‘Silencio’, ‘Conciencia Intranquila’ and a couple more. I recorded the tenor sax on the band’s first four records.

Juan Carlos Arrechea is one of the best Latin and Colombian folk percussionists, he has lent much weight to La Mambanegra. He has an incredible tradition with the congas, something that the callegüeso [the group leader] knows how to take advantage of live.

With ChocQuibTown, I made the string arrangements and recorded the sax for ‘Pescao envenenao’. I recorded some pieces for the Oro album, and made various arrangements for the Behind the Machine album. I also spent some time playing live with them and travelling, but they needed somebody dedicated only to them and the times with La 33 would not match.

Our second live percussionist, Larry Viveros, was a member of ChocQuibTown up until a few months ago. He played on almost every album, and well, you can figure out for yourselves the number of stages he performed on over such a long period. When he finished with them, he gave us the chance, and we brought him over! He’s been playing with us since this year’s summer tour in Europe.

BP: Please tell us about your expectations for the latest release of your single Pa Gozar and your Latin Grammy nomination.

Pablo: We are excited. Our first two singles were covers of Latin American musical greats such as Héctor Rivera, and Oscar de León, but with this new single, Pa Gozar, we want to fill the void felt by those who haven’t listened to an original song from the band.

Pa Gozar is one of the songs on the album [called Salsangroove] nominated for a Latin Grammy award. It is one of the most explosive of the disc, a combination of the tumbao of the descarga.

Concerning the Grammy, we thought it would be difficult to get a nomination, being an entirely independent band among many proposals in the same category, but we made it. That’s why we think we have more chance against just four other nominees, but we don’t let that go to our heads. We keep our feet on the ground, working hard to make this beautiful seed grow.

BP: Please tell us about the production of the videos of your singles – do you have any anecdotes? Your videos have a very urban character, for example the fusion with hip hop in ‘Mujer Divina’.

Juan Carlos: Well, our videos have been self-managed, and we’ve worked with a group of wonderful people who came with a great attitude and real willingness to work with us. All of that comes together to make a hardworking team who are dedicated to taking the project forward.

Do videos have an urban character? Yes, they do. We were born in Bogotá, and besides salsa, there are many other influences to our music, hip hop among them. We’ve been fortunate to have the great MC N. Hardem with us, he’s made a great contribution to the ‘Mujer Divina’ version, a piece in which we wanted to show a little bit of the urban character.

BP: You’ve played in other countries, in Europe. How has this experience been? Which other festivals/countries are you planning to visit?

Juan Felipe: We had our first European tour with Salsangroove this year, and it was an unforgettable experience. Some days in hotels, others at friends’ houses, long overland journeys, assembling and disassembling our things, cooking – there is a talent for cookery in this band, that’s worth mentioning – well, everything that is related to a first self-managed tour. But all of that was exactly what made the team so strong, and meant the group were incredibly close in every show: the camaraderie. The strength of the group, the response of the audience was incredible, and we felt their energy in every place we played.

We are already planning the 2018 tour. We think Germany, France, Spain, and England are good options, and we are currently working on that, we’ll see, the more concerts the merrier! We expect to visit every country and festival possible.

BP: Where will we see you in Colombia?

Pablo: We are working out the dates, and we want to play our music all around Colombia. The closest gig on the agenda is on December 1st at the Palo Santo festival with other artists at Auditorio Lumiere in Bogotá.

BP: How would you define yourselves as a trend, as a music band?

Juan Felipe: Defining oneself is difficult, but I think we are part of that Colombian music trend that goes back to the roots to look to the future. There are many examples of that, probably since El Bloque de Búsqueda, the beginnings of Sidestepper, La Mojarra Eléctrica. We belong to that scene, and were influenced by it. We turn to our past to find more sounds – it’s very enriching to have so many people taking a risk and leaving what’s conventional.

Some have said we belong to ‘electro-salsa,’ others say we are ‘bass latin music’, I actually don’t know, as long as we like it and people like it…we’ll continue looking for more sounds to see what colours we achieve…it’s a long road.

Juan Carlos: Well, guessing the future is difficult, but one thing we know for sure is that we are working hard to position our project; we want to continue traveling and sharing our music to reach many people and leave an impression.

BP: How does it feel to be producing these re-versions of the salsa classics; Llorarás by Oscar de León, for example. What does it mean to you to produce versions of the songs by these monsters of the genre?

Pablo: To a great extent, this album is a tribute to these great interpreters and composers of the ‘golden’ age of salsa: to Maestro Joey Pastrana, to Cheo Feliciano, Orquesta Colón, Los Hermanos Lebron, Hector, Celia, Omara, Ruben, Oscar, Joe, Niche, Ponceña, Matancera, the great Benny Moré, all of the Titos – except Rojas – and all of the Cuban rumbas. I’m sure I haven’t mentioned all of them, just as I haven’t mentioned, because of all this excitement, that there is also some Afrocolombian folklore from both, the Pacific and the Atlantic coasts, and also some improvised rhythms from the heart – especially JuanKa Arrechea’s heart.

Salsangroove have been nominated in the Best Tropical Fusion Album category. The 18th Annual Latin Grammy awards will be announced on November 16. 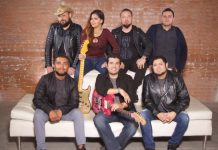