Interview with leading members of Cimarrón who describe the music as a ‘nomadic trip’ and explain the importance of Joropo’s musical roots.

Cimarrón, the group who brought joropo music to the global stage, recently released their new album, Orinoco. There’s also a new video for one of the songs on the album, ‘Tonada de La Palomita’, filmed high up in the Cerros de Mavecure.

“The song plays tribute to our ancestors and indigenous communities in the region. Llanero music has never recognised the [African] and indigenous contributions to our music – and we have been part of that problem,” the band’s lead singer Ana Veydó tells The Bogotá Post in an interview.

Joropo – a type of llanero music played by Colombian and Venezuelan cowboys – is traditionally characterised by harp sounds, stomping, bass guitar and maracas.

Led by singer Veydó and harpist Carlos ‘Cuco’ Rojas, Cimarrón have been reinterpreting joropo music for the past 20 years on the international stage. They are known for their lively and colourful performances, as well as the twist they give to llanero music.

“The structure of our music comes from African songs, with call-and-response lyrics. They are songs with a leader and a chorus…We recognise how important African influence has been in [joropo] music,” Cuco explains.

One characteristic of llanero music that they have integrated into their music  is the zapateo, or stomping dance. Cimarrón has their own zapateo dancer, who also plays the peruvian cajón. Although the zapateador rhythms sound like a Spanish tango, their roots are in Africa.

“It actually comes from central and western Africa. The dances hit the ground. Even the melody of the harp and voice sounds like blues and has African musical patterns,” Cuco explains.

Veydó added, “We were the first to add the zapateo dance as part of the instrumentation, and now it has proliferated,” Veydó said.

To pay homage to the indigenous communities and their influence on joropo music, Cimarrón added sounds from the cacho de venado, a deer skull whistle used in indigenous religions ceremonies, adding a level of spirituality to their music.

“Cimarron [takes listeners] on a nomadic trip, and we want to unearth the spirit of our traditions and bring them with us,” Cuco says poetically.

The group also adds contemporary sounds, and the harpist explains that there is a lot of common ground with electronic beats. “What the indigenous do with the cacho de venado instrument is actually a loop [the basis of electronic music]. It’s repetitive and has a ritual feeling.”

He finishes, “Electronic music is a musical concept that helps us find the ritual aspect.”

To match the song’s spiritual sounds and messages, Cimarrón decided to film the music video for Tonada de La Palomita in an equally magical area: the Cerros de Mavecure or Mavecurre Mountains, which are part of the Guiana Shield.

Members of the indigenous community Puinave de Remanso, who guard the land around these ancient rock formations, lead the group up the Inírida river and up into the mountains.

It was a challenge for Cuco to haul the 16-pound harp up and down the tiny man-made mountain steps, and in fact on his way back down, he almost fell to his death, but was saved by a member from the community. But the effort paid off in the final product, directed by French director Jeremiah.

Veydó tells us, “The mountains seemed magical to me. They were beautiful, and when we considered the melody [of Tonada de La Palomita], a song with a very indigenous sound with the cacho de venado instrument, we thought this would be the perfect place to film the song.”

Today, after 6pm, Cimarrón will be playing in Bogotá at the Parque Simón Bolívar, as part of the celebrations for Bogotá’s birthday and 200 years since Colombia’s Battle of Boyacá.

Cimarrón will take their music on a US summer tour, giving international fans a chance to taste their new genre-bending album. 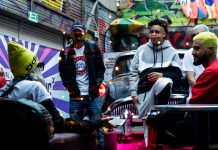 Irie Kingz of the dancefloor﻿

Tristan Quigley - September 25, 2020
In a new series focusing on craft beer in Bogotá, we look at Tierra Santa

Oli Pritchard - March 18, 2020
There’s a lot of information and disinformation flying around about COVID-19, more commonly known as the coronavirus. We asked Migración Colombia to solve some of the problems that readers have told us they’re worried about. Here are the answers