A string of botched robberies that have left at least four people dead in the past few weeks has swept up the city in a feeling of insecurity. In the most recent survey published by the Camera de Comercio, 54% of bogotanos said that they did not feel safe.

And while the perception of crime is often much higher than the reality, government statistics from last year do show a significant rise in robberies, up by 60% from 2016 to 2017. Chapinero and Usaquén experienced 67% and 76% increases respectively in robberies alone in the twelve month period. More generally, an average of almost 170 robberies are reported daily in the city.

While the numbers of robberies have increased, Minister of Defence Luis Carlos Villegas recently announced that homicide is at the lowest it has been in 32 years. Further, Bogotá Police Commander Hoover Penilla believes that what’s happening now is no different than in the past. Rather “it has acquired more complex connotations through media and social media.”

Most of the theft is thought to be coordinated by complex crime organisations with sophisticated re-sale operations. President Santos recently responded to people’s fears by deploying an additional 500 police officers who are being trained to better meet Bogota’s security needs, and in particular, target organised theft gangs. They are expected to be on the streets from March onwards.

Most recently, the Mayor’s office announced a controversial three month ban on males over 14 years of age riding pillion, as a number of crimes are being committed by motorbikes with two passengers. However, it is unclear how much this measure will actually help to reduce crime, given that this theft modality only represents 5% of thefts committed in the city, compared to the 75% perpetrated by criminals on foot.

Question marks have been raised over the effectiveness of the government’s anti-crime plans, little is being done to target shockingly high impunity rates – higher than 90% for some crimes. In addition, measures introduced by the government tend to be reactive (in this case, after several violent crimes grabbed media attention) and not proactive. As such, issues such as improving intelligence related to crime dynamics, rooting out police corruption or improving lighting in poorly-lit areas of the city have not been forthcoming.

Here are a few measures that can help minimise the chances of falling victim to crime: 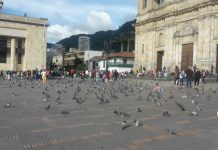