Home Business Change.org, the times they are a-changing

We speak to Victoria Emanuelli and Jonatan Rodríguez from Change.org, the online petition platform.

Corruption is unsurprisingly one of the top campaign topics for Colombia on Change.org, with a petition on congress members’ wages gathering 130,000 signatures. That’s one of the things that the organisation’s director for Latin America, Victoria Emanuelli, told us when we met up with her during her trip to Colombia at the end of August. “There is another one that has to do with the environment that has a lot of signatures,” she explained. “And the one related to the Varadero reef, located right in the middle of a proposed dredging channel, which has 20,000 signatures.”

Jonatan Rodríguez, the man on the ground in Colombia, tells me that Change.org is one of a number of campaign sites that allow users to start online campaigns on anything from saving wild animal shelters to having filmmakers produce one more season of Sense 8.

Health and women’s rights are also high up on the list of issues that people petition for here. Plus, of course, both sides of the bullfighting debate have thrown their battles into the online ring, using the platform to push their opposing causes.

It’s an interesting aspect of this type of campaign site – since anyone can propose any petition, the platforms themselves cannot take sides. For example, in the run up to (and aftermath of) the peace referendum last year, both ‘Yes’ and ‘No’ campaigners were petitioning hard to garner support. However, Change.org didn’t join the fray.

“It’s a very controversial topic, which we did not promote much because we know it is a very polarising topic, and we try to have a platform that is open and neutral,” explains Emanuelli.

Many commentators have said that citizen involvement will be crucial in a post-conflict society. Based on her conversations with different stakeholders, Emanuelli agrees. She also sees that “this is a good moment to advance in Colombia by empowering citizen petitions, which is a trend we see is growing and growing.”

That said, she stressed that Change.org is not a lobbying platform, so cannot take a direct position on issues such as the attacks on human rights defenders. “We cannot think we are a human rights platform, so we are not going to take sides. We help the creators of a petition and help them articulate that with the authorities so some kind of decision is made, nothing beyond that.”

The political scientist explained that “Change.org is a platform for citizen empowerment. We strive for citizens to make the changes they are seeking to make, through online petitions, which in reality are campaigns.” 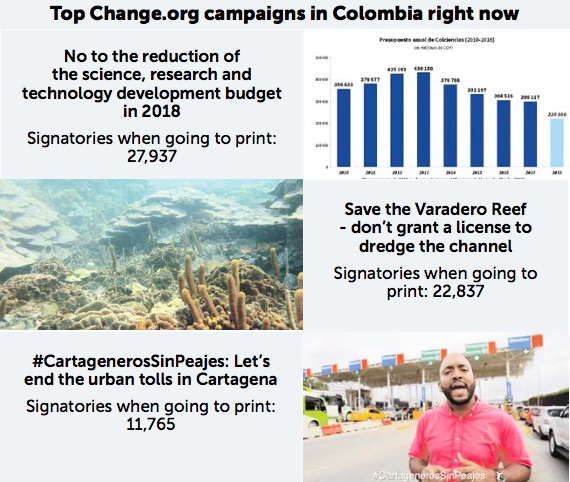 One of the ways that they do that is through something called “articulating agents” who work to get the signatures off the page and into the offices of those who make the decisions by actively generating dialogue with the authorities. That also allows them to support complex campaigns which involve various decision-makers such as the current petition against science budget cuts.

For example, Supersalud has a special platform set up so that they can respond quickly to health-related petitions. Moreover, in July the Vice Ministry of the Interior unveiled #CausasCiudadanas, committing to try to facilitate an answer whenever a petition surpasses 20,000 signatures. With a smile at Rodríguez, Emanuelli describes the move as “very chévere.”

Citizens of countries like the UK, where the government promises to consider petitions with 100,000 signatures for parliamentary debate, could be forgiven for being cynical since the two most-signed petitions had little impact. One, with over 1.6 million signatures, tried to stop Trump from making a state visit to the UK. The other, with over 4.1 million signatures, called for a second Brexit referendum. Parliament rejected them both.

Websites like Change.org and their counterparts Avaaz, ipetition or Care2 have been growing in popularity since the late 2000s. Some question the effectiveness of the sites, arguing that it allows people to waste government time with spurious petitions. For example, if a petition demanding that President Santos always wore a silly hat got 20,000 signatures, it would have to be taken seriously.

But in an age of political apathy – and indeed in a country such as Colombia where less than 38% of the population voted in the peace referendum – surely anything that encourages and enables political involvement is a good thing?

That brings us to the other big complaint about this form of campaigning. With accusations of ‘armchair activism’ or even ‘slacktivism’, critics argue that it’s not enough to just click on a cause. If people want to generate real change, they need to actively support it, whether by donating real money or getting out on the streets and campaigning.

At the same time, these petitions can actually be a stepping stone for other forms of activism. They also generate media coverage, influence public perception and, of the thousands of campaigns every year, there are plenty of success stories to choose from.

Change.org trumpets 22,589 victories in 196 countries on their website. They highlight specific campaigns in Colombia such as getting 8,000 signatures to pressure Cafesalud to stop delaying specialised care to a man with a malignant bronchial tumour,  or pushing senators to donate five days’ salary to help the victims of the Mocoa landslide.

Interestingly, Emanuelli tells us that Colombia, with about 1.5 million users, is one of the countries where the site has the greatest effect per user. “It has the greatest impact in terms of the number of users, in Colombia the model is really functioning very well on this point.”

The website has over 270 million users worldwide and it is clear from talking to Emanuelli and Rodríguez that they have ambitious plans to continue to empower people to campaign for the changes they want to see in the world.