Home Entertainment Culture “Whenever I start reading, I can feel the power of words.” A... 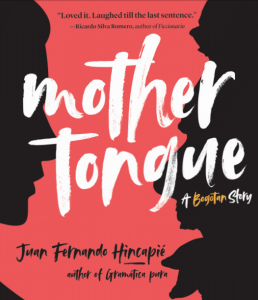 Juan Fernando Hincapié is a writer, a translator and, most importantly, a Colombian.

His journey through the literary world has played witness to the creation of two previous novels, Gringadas (2010) and Gramática pura (2015) alongside further endeavours which took him to the United States before returning to live in his homeland in the city of Bogotá. His writing so far has revealed a deep fascination between languages, identity and the unforgiving realities that come hand in hand with foreignness. This month will also mark the release of his third novel, Mother Tongue, which is written in English and takes the reader further into the colourful realms of cross-culture understanding and linguistics.

As a writer, Hincapié is already on the way to making his mark as a staple in emerging Colombian literature. As a book, Mother Tongue will leave you in barrels of laughter, sometimes frustrated, increasingly intrigued and a plethora of other emotions which tend to constitute a good read.

The story within Mother Tongue details the life of Bogotan local Enrique Márquez Pino and the steps and everyday decisions that fall into place which see him move from Texas back to Bogotá. It will talk about familiar places from both the countries and leave the reader entwined in the feelings delivered by the city itself, and what it means to be in it.  In something of a memoir, the text provides candid stories about football, Mexicans, lovers, teachers, work and parents divided into four sections within the book. Most prominent is his keen ear for linguistics and seemingly most people’s inability to understand the important features that constitute the Spanish language.

What sets this book out amongst the rest, however, is the interesting inclusion of 100 footnotes, some of which take over most of the page. Juan points out that these ‘footnotes reveal the narrator’s eagerness to explain himself, almost telling another story within the book’.

Since embarking on his career as an author, Hincapié expressed how his process has developed. ‘It’s more painful now, I know more things’, he notes, yet that has not deterred his obsession with delivering these even more candid sidenotes throughout the duration of the book. They not only reveal a deeper element to the character but also another dimension to exchanges between people and, of course, how language affects that. Not only this, Hincapié had fun with the concept, reminding me that ‘you will remember a book with 100 footnotes’. It’s not the first time that the author has experimented with this concept, Gramatica Pura also includes a considerable number of footnotes and provides a parallel narrative to keep the reader on their toes.

One thing that Hincapié reminds me of is that although both him and Enrique have ties to Texas and Bogota, he is completely independent of his character –  ‘he’s so immature,’ Hincapié explains. Admittedly, there are times when you might feel anger towards Enrique, but only through completing the book can there be an enlightened understanding of how important language is for him, for our author and especially the readers.

‘If I could start all over again I’d learn more languages’.

Juan warmly relays his fascination with different languages, their significance and one of the personal interested that eventually led him to work in translation, ‘words are powerful and I’m obsessed with reading, if I could start all over again I’d learn more languages’. It’s interesting on that note, that Hincapié chose to write this novel in English and although an explanation for that can be found within the story itself, one might wonder whether the book will eventually be translated into other tongues. Hincapié however, will not be the one to translate it. As a former translator by trade, the author pays homage to literature as ‘greater than any art form’ whilst also acknowledging that ‘there is something that is lost in translation’. On his own story, he recounts, ‘I would be trying to improve every sentence, I cannot contain myself and I will try to do something different’.

Ultimately the entertaining stories, footnotes and conversations that we hear through the words of the protagonist take the reader on a winding journey in the pursuit of understanding what constitutes identity itself. The book is ‘A Bogotan Story,’ and one that opens the door on modern-day Colombian culture and beckons the reader into exploring what it means to live in a Latin American country in the looming midst of it’s larger American neighbour. Choosing himself to return to his homeland, the allure of the country, it’s culture and language plays an underlying role in the thematic tissue of Hincapié’s words and will leave the reader hunting for buñuelos after completing this personal, meandering story behind everyday Colombian life.

Here, Juan also perfectly captures the greater feeling that drives his story: ‘I have no idea what it means to be Colombian, but there’s a feeling and it’s intense sometimes. An act of Faith.’

The launch date of this captivating little book will be on Saturday, April 28 at Salón Madre Josefa del Castillo, in connection with FILBo. It is marked at the reasonable price of COP$32,000  but can be purchased at a discount during the festival and also purchased online here.

On the theme of sidenotes: Juan Fernando Hincapié informed me that he also has a lot of friends in the Ministry of Foreign Affairs, so fellow Gringos are kindly urged to buy this book in order to avoid the risk of deportation.