Home Features The Korean connection, Colombia in the korean war

Kieran Duffy goes back over 65 years and takes a look at the little known role that 4,314 Colombians played in the Korean War

North Korea hit the headlines this year when, on January 5, they claimed to have detonated their first hydrogen bomb. This was yet another threat to an uneasy peace which has lasted since the end of the Korean War in 1953. Amidst economic woes and rapid developments in the peace process, the far-away problems of Korea probably seem very remote to most Colombians. However if you pay a visit to the military academy on the septima you will find an interesting memorial: a model of a traditional Korean tower, with an engraving thanking Colombia for assisting South Korea during the war. In an almost forgotten chapter of the nation’s history, Colombia’s armed forces took part in this terrible conflict. Thousands of young Colombian men crossed the Pacific, many never to return.

The Korean War began on June 25, 1950 when the USSR-allied North Korean army swept across the border of their US-allied neighbour, South Korea, quickly taking control of most of the country. UN and Chinese intervention (the former being a primarily American force) saw the front-lines move up and down the peninsula in the first open engagement of the Cold War. When Colombian troops arrived in Korea on June 16, 1951, Seoul had just been recaptured by UN forces for the second time.

It is surprising that the Colombian government chose to become involved in a distant war, given the chaotic state of the country at that time. It had been just over three years since the assassination of Jorge Eliécer Gaitán had plunged Colombia into a civil war between the Conservative government and Liberal guerrillas. All other Latin American nations had chosen to ignore US appeals and sit the war out – including Brazil, who had fought alongside the allies in the Second World War. Nevertheless, in an effort to further Colombia’s relationship with the US and fight so-called “Communist tyranny”, President Laureano Gómez agreed to support the UN intervention in Korea.

Korea proved a harsh country to fight in, with mountainous terrain, scorching summers and bitterly cold winters. The Colombian army was also in poor shape – many soldiers were dressed in over-sized surplus US army uniforms. Nonetheless, on August 7, 1951, the anniversary of the Battle of Boyacá, Colombian troops entered combat, fighting in the war’s last major offensive. For the first time, the cry ¡Viva Colombia! rang out on a foreign battlefield.

The remainder of the war was a story of stalemate and attrition as the armies dug trenches and the politicians struggled to find a diplomatic solution. While Colombian sailors patrolled Korean waters, their comrades on land took part in bloody fighting. There were four Colombian battalions in combat at different times and places.

The most famous actions by Colombian troops took place at the Battle of Old Baldy. Towards the end of this ten-month long battle, the Third Colombian Battalion was outnumbered by Chinese forces and suffered terrible casualties, with 90 soldiers left dead. Despite these tragic losses, the allies succeeded in holding off the Chinese attack and the Colombians were praised for their courage. The March 25 edition of El Espectador in 1953 proudly displayed a quote from a US war correspondent who claimed, “They are the bravest men I have ever seen”.

Many members of that Third Battalion were unfortunate enough to be captured by Communist troops and endured terrible conditions as prisoners of war. Among them was Boyacá native Pedro José Murcia, whose children Cesar and Elena spoke to The Bogotá Post. Together with his cousin Murcio he volunteered to be among the soldiers sent to Asia.

César said, “They asked the soldiers if they wanted to see other countries and have exciting experiences. My father said to his cousin ‘Let’s go’.” After a long sea journey with stopovers in Hawaii and Japan they arrived in Korea where Pedro served as a radio operator, a task which made him a top priority for capture by the enemy.

After narrowly avoiding capture once, he was eventually taken prisoner by Chinese soldiers. “He was sent to an island where there was a concentration camp. The prisoners carried out hard labour and the diet consisted of nothing but rice. Plague was common.” His family believed he was dead and buried some of his belongings in an otherwise empty grave. Murcio died in battle without ever discovering his cousin’s fate. Pedro was one of the last allied prisoners released, and upon his return to Colombia, his family were shocked and delighted to discover he was alive. He went on to live a long life after the war and visited Korea for the commemoration of the war’s 50th anniversary.

This family was far from the only one in Colombia affected by the conflict – of the 4,314 soldiers who fought in total, 141 were killed, 448 were wounded, 69 were recorded as missing in action, and 30 became prisoners of war. Sadly, despite such sacrifices, Colombia’s contribution to the war effort is often forgotten in South Korea. While Koreans have divided opinions on the role of US military, which later supported military dictatorships in the south, they have very positive memories of other allied nations – most notably, Turkey, which sent almost 15,000 soldiers. Colombia, unfortunately, receives less attention, perhaps due to lack of contact between the countries. 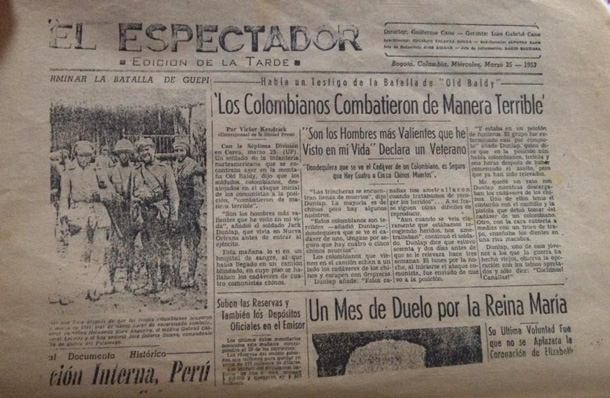 But what is much worse is how little attention the war receives in Colombia. The Korean War is often known to Americans as ‘The Forgotten War’ as it is overshadowed by Vietnam. Likewise, it is overshadowed in Colombia by the country’s long-running internal conflict. It occupies a small place in Colombia’s national memory and many people are unaware of the nation’s involvement in Korea. While veterans did receive scholarships and opportunities for state employment after the war, the Colombian government has continually prevented them from claiming a pension offered by South Korea.

This is all a great shame. Those soldiers played a key part in preserving South Korea’s freedom and allowing its growth into a prosperous modern democracy, something all Colombians should be proud of. Over sixty years on from the end of the Korean War, recognition is long overdue. 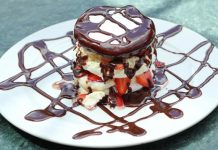 Eating out in Bogotá, Bogotá restaurants